How do we measure the value of Bitcoin? Like any other conventional asset, we have been using market capitalization, ‘market cap’ for short. Today, Bitcoin has a market cap of $777.7bn, it had pierced the $1tn mark in March 2021. In the case of Bitcoin, market cap is calculated by multiplying the circulating supply of the coins by the current dollar price.However, this type of measurement has limitations for Bitcoin. Bitcoin’s network is constantly evolving and has developed around it an exciting and innovative industry. Yet, it has also quickly assumed for itself a role as a digital store of value. This means there are lots of hands that are not moving their bitcoins… just waiting, perhaps for the next bull market. So, it becomes important to find a measure of active bitcoins rather than just all bitcoins many of which can be considered inactive. And when you look at a chart of market cap with the Bitcoin price, you will see that the market cap merely follows the Bitcoin price. 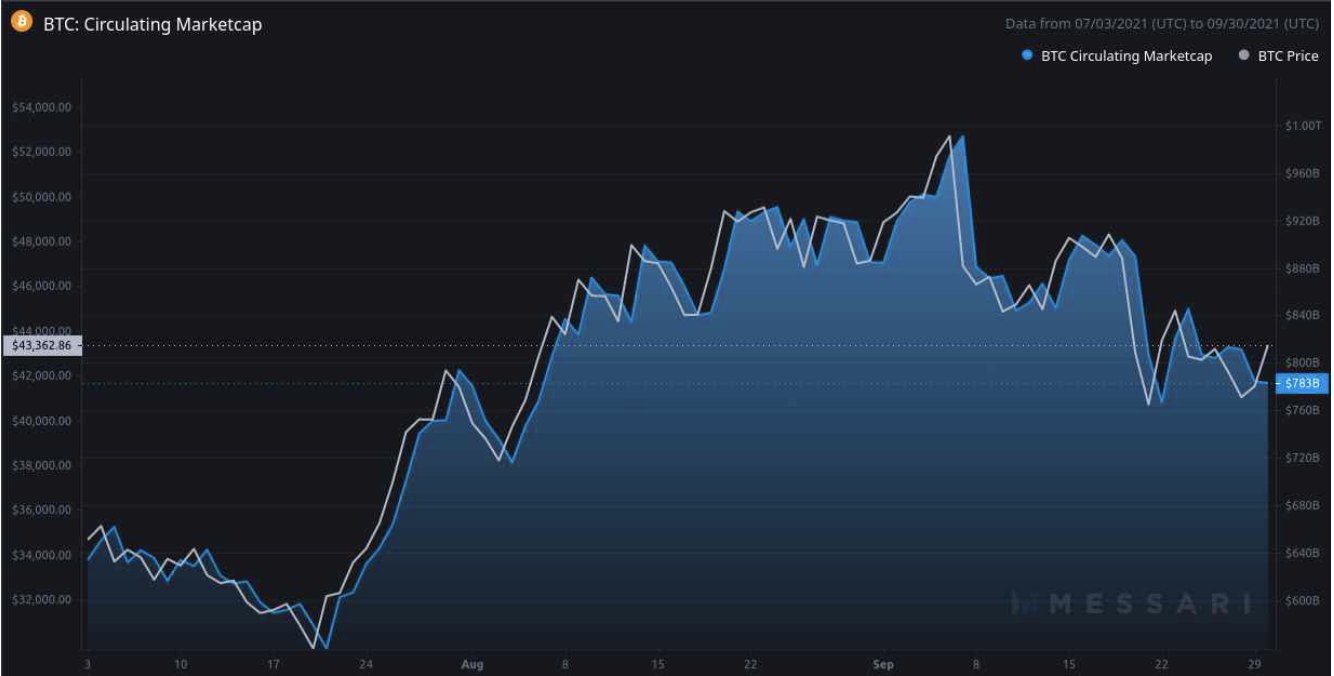 What we want is a way of using network activity to measure the real-time value of Bitcoin. This is something market cap cannot measure because it is using two indicators (Bitcoin supply and dollar price) that say very little about the decisions that people are making about their bitcoins. So, we look to a metric that has come about through Bitcoin: realized market capitalization. Realized market cap calculates the value of each coin at the time it was last moved. The metric strips out the HODLers from the assessment about how valuable Bitcoin is, and gives more weighting to those bitcoins that are currently active in the network, that is, being moved. When we do that, see the chart below that uses the same time period as the chart above: 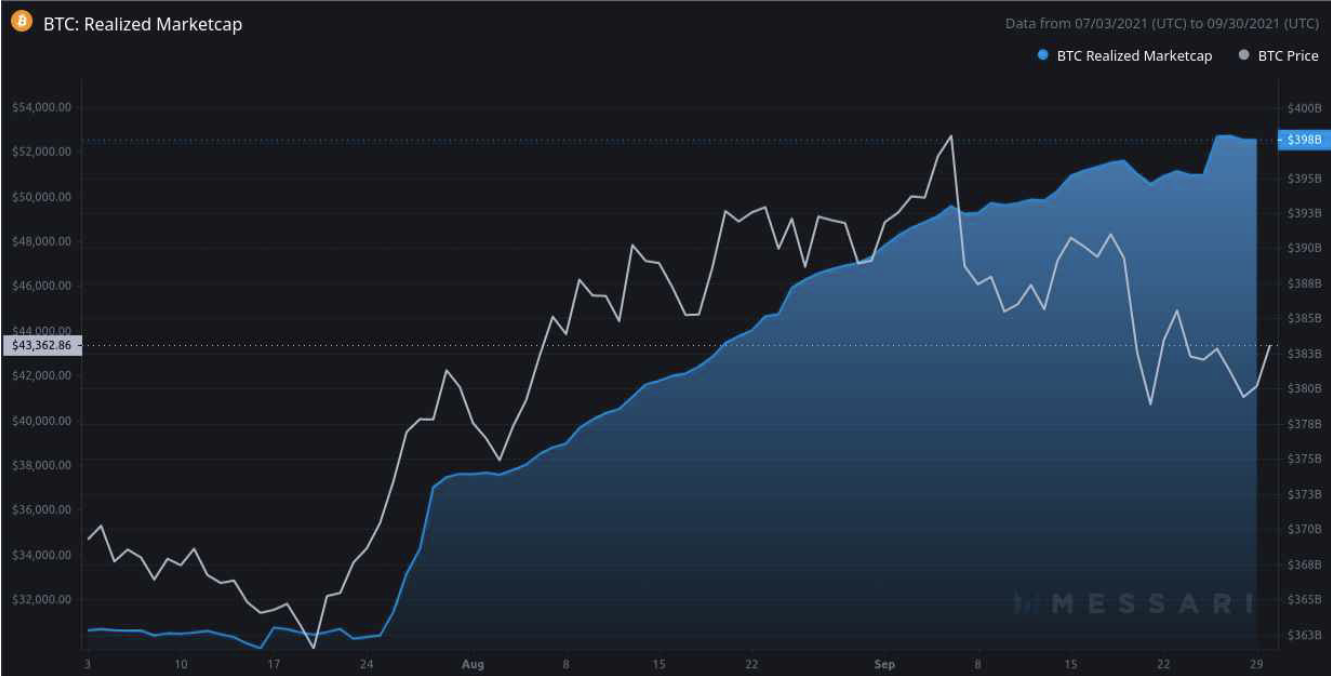 You will see that, during September, the Bitcoin price has declined but the realized cap has continued to rise. This is because more people had moved their coins following an appreciation in value than had moved their coins following a depreciation. Looking at this chart as a price trend, are we correct to suppose that the Bitcoin price will rise in proportion with the rise in the realized cap? Well, let’s see what history shows us, a 5-year history: 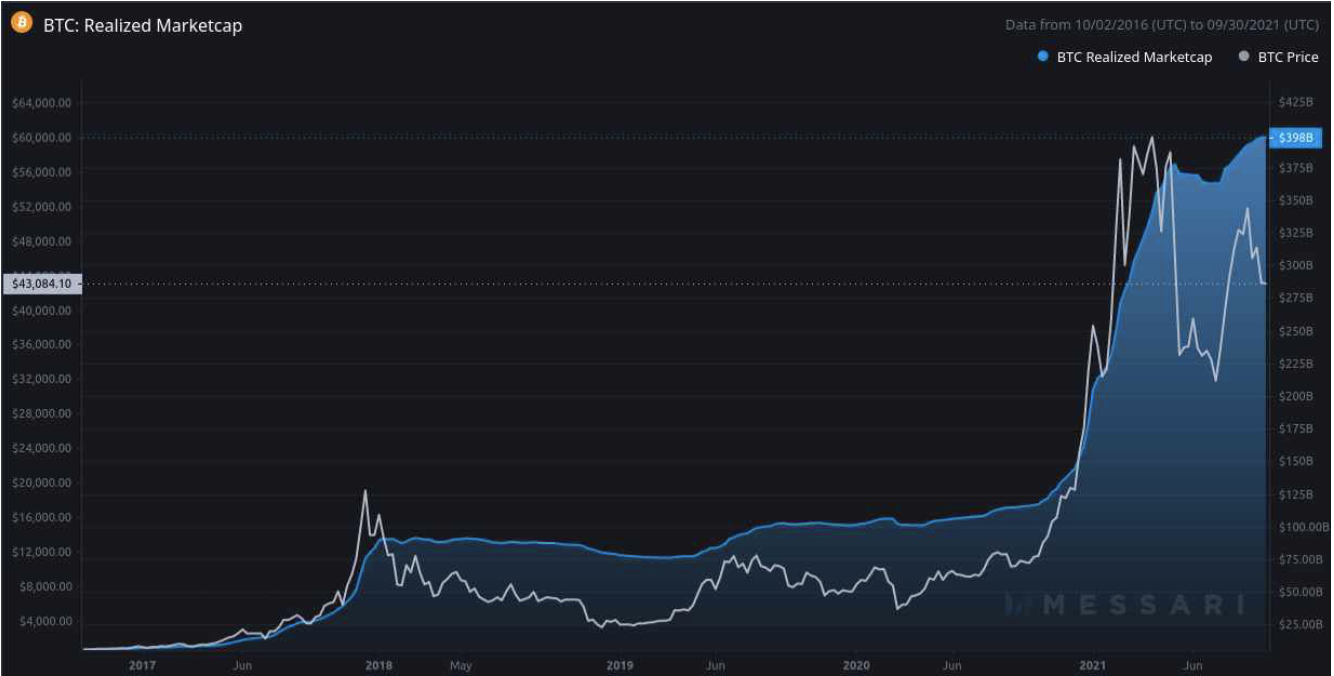 On September 25, 2021, bitcoin’s market cap was $783bn. But its realized cap was $398bn (Messari). Just over half of the bitcoins in that circulating supply had been active. The realized cap is a metric that should give a more accurate picture about Bitcoin investing than the traditional market cap. As investors wish to determine whether an asset is under- or overpriced, investors may be better served by consulting the realized cap. All the market cap does is measure the quantity of the coins without taking into account their changed value at each transaction.